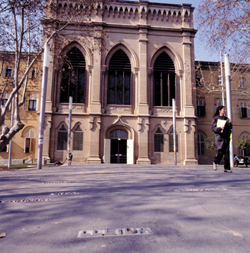 A University founded over 700 years ago

The University of Lleida has its roots in the Estudi General de Lleida, which was created in 1300 by virtue of a charter granted to the city of Lleida by King Jaume II of Aragon. He based his decision on a papal bull issued in Rome on 1st April 1297, by Pope Boniface VIII.

With the birth of the Estudi General, a university neighbourhood grew up in Lleida with students arriving from all over the Kingdom of Aragon and many other regions. As happens nowadays, this breathed new life into the city. However, the students and professors formed a community with special privileges and immunities. The parish church of Saint Martin became established as the university’s venue for solemn ceremonies, and it received financial backing from the municipality and the Cathedral Chapter.

Despite the flourishing times that the University of Lleida experienced until the first half of the 16th century, its situation became more complicated with growing competition from the new universities that were being created in other territories in the kingdom.

The schools of the Estudi General de Lleida managed to maintain the prestige they had acquired over time despite the Estudi having lost the exclusivity and hegemony bestowed on it through its privileged foundation charter.

From the second half of the 17th century, a period of decadence began that would continue until the reign of Philip V in the 18th century. After the War of the Spanish Succession, the Bourbon reformers decided to create a new university model in Catalonia. The small town of Cervera, some 70 kilometres east of Lleida was chosen as the location for a new university to thank the town for its support to Philip V, who Lleida and Barcelona had opposed from the outset of the war. The new unified university was founded on 11th May 1717 and after 417 years in existence a Royal Decree of 9th October ordered the close of the old Estudi General of Lleida along with other Catalan universities. This was accompanied by severe political repression that resulted in Catalonia losing its original institutions. Thus ended the first stage in the life of the Catalan university system, which had enjoyed uninterrupted academic activity over a long period of history

The creation of a teacher training school in 1841 was the first step towards the foundation of the present University of Lleida. However, it was not until 1968 that university studies in Lleida were effectively re-established and consolidated as extensions to various universities in Barcelona: Law was introduced in 1968, Agricultural Engineering in 1972, Arts and Philosophy in 1975, and Medicine in 1977.

The 700th anniversary of the creation of the Estudi General was commemorated by an extensive programme of academic and cultural events between 1997 and 2000. This landmark occasion reflected the growing prestige of the University of Lleida. The events were attended by the highest authorities from political, economic and social circles, as well as leading personalities. All this has helped to create an atmosphere of self-confidence and has enhanced the image of the University of Lleida on the international stage.