The UdL opens the international symposium on the author of “The Second Sex”. This year marks the 50th anniversary since the publication of Simone de Beauvoir’s controversial book 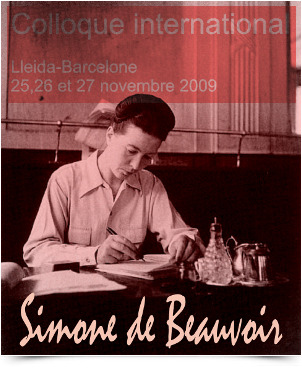 Simone de Beauvoir Symposium. University of Lleida. The French writer and philosoper, Simone de Beauvoir, the partner of the equally well known Jean-Paul Sartre, will be the subject of the international symposium that the University of Lleida and the University of Barcelona are devoting to her to mark the 50th anniversary of the publication of her most well known book and a cornerstone of the feminist movement, Le Deuxième Sexe (The Second Sex), and that is the only event planned to date in Spain to commemorate this anniversary.

The UdL will be responsible for opening this scientific meeting on Wednesday 25 November next. It will be held at the Rectorate and attended by experts from all around Spain, as well as from France and Canada. Particularly worth mentioning is the French writer Claire Etcherelli, who worked with Simone de Beauvoir on the magazine Les Temps modernes.

Etcherelli was born in Bordeaux, the daughter of a family of exiles from the Basque Country – her father was shot by a firing squad in the Spanish Civil War. Her first novel, Elise ou la vie vrai, is about women who work on factory production lines, no doubt influenced by de Beauvoir’s work. Etcherelli will talk of her experiences of working side by side with the existentialist philosopher when she comes to the UdL.

The symposium, which will continue at the University of Barcelona on 26 and 27 November, will also be attended by Béatrice Didier, emeritus professor at the prestigious École Normale Supérieure in Paris, where Sartre, Nizan and many other French intellectuals studied.